Roots of the Syriac Orthodox Church can be traced back to the very dawn of Christianity, to the church of Antioch, where the disciples were first called Christians (Acts 11: 26). It is the first established church in Christianity gathering converted Jews and Gentiles in the name of our Lord Jesus Christ, and the second church after that of Jerusalem. Ecclesiastical history and traditions tell us that St. Peter the Apostle established a church in Antioch (+ 37) and became its first bishop. After his martyrdom, he was succeeded by Euodius for the converted Jews and St. Ignatius Noorono (the Illuminator) for the converted Gentiles. Later on, the bishopric of Antioch was recognized in the ecumenical Synod of Nicea (+ 325) as one of one of the Patriarchates of Christendom (along with that of Alexandria and Rome).

Antioch’s bishopric produced a line of succession beginning with Apostle Peter and continues to this day in the Syriac Orthodox Church. In the mid of the 5th century, Bishops of Antioch, Alexandria, Byzantium and Rome, would be called patriarchs. The Syriac Orthodox Patriarch of Antioch used to be known by his own name; however, since 1293 the patriarchs of Antioch adopted the name Ignatius (after the Illuminator).

The See of Antioch continues to flourish till our day, with H.H. Mor Ignatius Aphrem II, being the 123rd Patriarch in the line of legitimate patriarchs. The patriarchate was forced to move from Antioch, which was the capital of the Roman province of Syria at the time of Christ, in 518, after a period of turbulent history, to different locations in the Near East until it settled in the Saffron monastery (Az-Za’faran or Dayro dKurkmo) in Mardin, Turkey, during the 13th century. After another period of heinous violence during and after World War I (which took the lives of about a half million Syriac Orthodox faithful), the patriarchate was transferred to Homs, Syria, in 1933, and later to Damascus in 1959. The Syriac Orthodox Church has produced several illustrious saints whose lives and works have a huge influence, not only on the Syriac tradition, but on Christianity as a whole. The Syriac church employs in its liturgy, which is one of the richest and most ancient, the Syriac language, an Aramaic dialect akin to the Aramaic spoken by Christ and the Apostles.

The Syriac Orthodox Church followers today are around four million; the majority of them reside in India and the rest are spread mainly in Syria, Lebanon, Iraq, Jordan, Turkey, Egypt, Europe, North and South America and Australia. The Syriac Church is a member of the World Council of Churches which she joined in the year 1960, and is one of the founding members of the Middle East Council of Churches. It is also a member in the Council of Local Churches and collaborates with the other Christian Churches, and takes part in the ecumenical and theological dialogues at official and non-official levels. 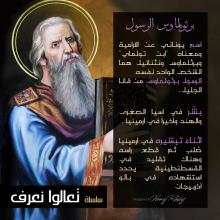